Ah Brunch, or late and extended breakfast, is one of my favourite meals and has really only just started to take off in London. WHAT ARE YOU DOING LONDON! Thankfully some restaurants have seen the light, and thus I'm telling you about them, with one lucky winner each month.

With relaxed and happy-go-lucky atmosphere, The Breakfast Club takes first spot for the best brunch in town. Coffee in mugs is always a good sign, and you'll be very pleased if you go for 'The All American'; a short stack of pancakes, eggs, sausage, home-style fried potatoes, streaky bacon and maple syrup, or the 'Breakfast Burrito' Chorizo, scrambled egg, roasted peppers, Portobello mushroom, gucamole, cheddar and spicy pepper sauce.

My recommendation though is to shun tradition, and get excited about the brunch-tastic 'Huevos Al Benny' as pictured below. Poached eggs, chorizo, roast peppers, avocado, fresh chillies, spicy hollandaise on toasted English Muffin. This culinary journey of wonderment involves all things good, and makes for a really really happy morning! 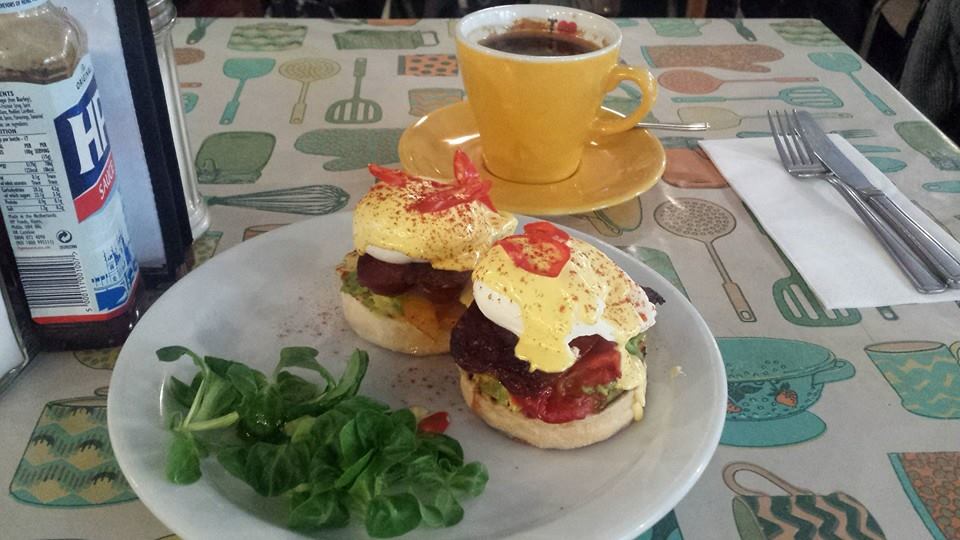 It's quite a story of how they came to be:

It could have all been so different. Two children of the 80s, searching for that elusive name for their first cafe in Soho…

‘The Breakfast Club’ could easily have been ‘St Elmo’s’ or ‘Save Ferris’. Chickens and pigs would have breathed a sigh of relief. But it was not to be and The Breakfast Club was born in 2005 when we moved into a small cafe on D’Arblay Street in Soho, painted the front egg yolk yellow and filled the place with junk from our childhood bedrooms.
The Lucky Trolls seemed to have worked, we built it and you came (thank you!).

In 2007 we opened on the lovely Camden Passage in Angel and then in 2009 East London beckoned in the form of the skinny jeans capital of the world, Hoxton. In May 2011, exactly two years after Hoxton we moved into our new home in Spitalfields along with our first dirty little secret, The Mayor of Scaredy Cat Town. Another two years down the line and we went South of the River for the first time, opening on Battersea Rise (Hello Yummy Mummys!) in May 2013. Through the launderette, The King of Ladies Man opened his pad and has since knocked up many notches on his SW11 bedpost. August 2014 saw us TAKING IT TO THE BRIDGE, with our new BC six opening just round the corner from Borough Market in London Bridge. Call Me Mr Lucky also came along for the ride.

They have locations in Angel, Battersea Rise, Hoxton, London Bridge, Soho and Spitalfields, with great news about their new out of town location - BRIGHTON! Be sure to get there early or late though, as it gets pretty busy, especially the Soho branch!

Oh - and they have a totally awesome 8bit website too. PLEASE check it out! http://www.thebreakfastclubcafes.com/
@TheBrekkyClub

Just one olive. What would choose as ...

Deep Fried everything at BoxPark this Easter